Fresh tuna steaks are versatile and easy to cook. Follow these tips and directions for grilling, skillet-cooking, and baking fresh and delicious tuna. We’ll teach you the tricks to pan-seared tuna steak, tuna steak seasoning, and more!

Tuna’s firm texture and mild to moderate flavor are just a few of the reasons why it’s so popular, especially for canning. Chefs love getting creative with fresh tuna, but it’s also easy to fix at home. We’ll teach you everything you need to know about this delicious fish, including how to cook fresh tuna, how to buy and store tuna, how to grill tuna, and more!

How to Season Fresh Tuna

Before preparing tuna steaks, rinse with cool water and pat dry with paper towels. Measure the thickness of the fish with a ruler.

Fresh suku tuna  a good marinade, which flavors this fairly mild fish and helps keep it moist during cooking. A short marinating time is all it needs, from 15 minutes up to 4 hours in the refrigerator. Tuna pairs especially well with Asian flavors.

Instead of marinating, you can also brush the fish with olive oil or melted butter, and season as desired. Try brushing tuna with a blend of olive oil and lemon juice, then sprinkle it with snipped fresh herb (such as rosemary or tarragon), salt, and ground black pepper

Tuna needs a watchful eye during cooking so it remains tender and moist. Because it gets dry and chewy when overcooked, the center should still be pink when it is done cooking. Some people like their tuna even more rare in the center

How to Grill Tuna Steaks

Grease the unheated grill rack or spray it with nonstick cooking spray. If not marinated, brush the tuna steaks with melted butter or olive oil, and season as desired.

For a charcoal grill, place the tuna steaks on the grill rack directly over medium coals. Grill, uncovered, for 4 to 6 minutes per 1/2-inch thickness or until fish begins to flake when tested with a fork but is still pink in the center, turning once halfway through cooking.

For a gas grill, preheat the grill. Reduce heat to medium. Place tuna on the grill rack over heat. Cover the grill. Grill for 4 to 6 minutes per 1/2-inch thickness or until fish begins to flake when tested with a fork but is still pink in the center, turning once halfway through cooking.

If desired, brush tuna with additional melted butter or olive oil after turning

How to Cook Tuna Steaks in a Skillet

Searing tuna steaks in a hot skillet caramelizes the surfaces of the fish and locks in the moisture. Start with 3/4-inch-thick steaks

Choose a heavy skillet that best fits the number of tuna steaks you are cooking. Add 1 to 3 teaspoons cooking oil or olive oil to lightly coat the skillet. Heat the skillet over medium-high heat until hot.

Add the tuna steaks. The steaks should sizzle when added. Cook, uncovered, for 6 to 9 minutes or until fish begins to flake when tested with a fork but is still pink in the center, turning once during cooking. Adjust the heat as needed if the skillet gets too hot

Expand Your Horizons with a Cooking Class

Sun May 10 , 2020
As we make our way through life, we develop interests and hobbies that are unique to ourselves. But finding those hobbies is not the easiest of processes. What you may not have realized is that partaking in a cooking class can not only expand your hobbies but give you a […] 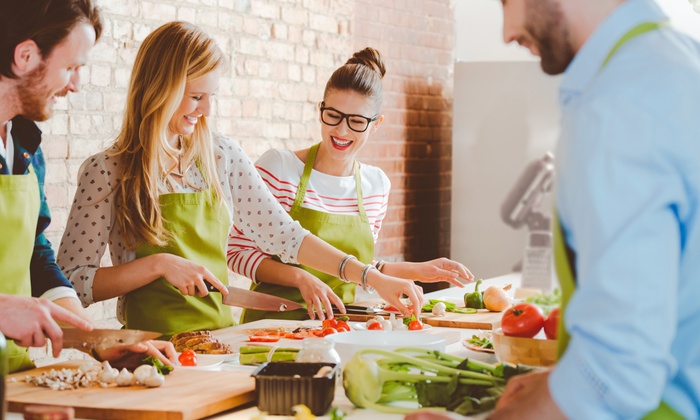 How to Buy Plant-Based Food

How to Cook Saku Tuna

How to Generate A Profitable Vineyard